…it was either I was gonna kill, or be killed

Zayquan Daniels spends his days walking the streets of Crown Heights, Brooklyn looking for trouble. But when he finds it, he doesn’t join in: he works to resolve it. Zayquan is a Violence Interrupter, doing same work that kept him safe as a participant in CAMBA’s Brownsville In Violence Out (BIVO) program, which works to reduce gun and gang violence in Brownsville.

Zayquan grew up in Brownsville, Brooklyn, a neighborhood where he says the environment of violence pulls young people into seemingly inevitable actions, like joining a gang, or escalating tense situations into violent outcomes. Before receiving help from BIVO, Zayquan was stabbed, watched his younger brother get shot, lost good friends and came to the conclusion that “it was either I was gonna kill, or be killed.”

Fortunately, Zayquan met Anthony Newerls, Program Manager of Brownsville In Violence Out, and  found alternatives to the violent lifestyle he had become accustomed to as a young adult. He worked to make changes in his own life. The sincerity of his transformation qualified him to become a “Violence Interrupter” (a community member formerly involved in gang or violent activity who is hired to intervene in conflicts brewing in the neighborhood) for the BIVO program and later with Save Our Streets (S.O.S.) in Crown Heights, Brooklyn.

In fact, since BIVO implemented the Cure Violence model in the 73rd Precinct in 2015, shooting incidents decreased by 25% compared to the about 10% citywide reduction.

Both S.O.S. and BIVO are programs based on the Cure Violence model of violence reduction that treats violence as a public health issue. The success of the model is attributed to the Violence Interrupters like Zayquan who says that once young people see that the cool people are promoting peace and conflict resolution, they want to do it as well. Zayquan knew a Violence Interrupter in Brownsville whom he trusted as a family friend and this kind of referral to the program made him more open to it, he said.

Once the Violence Interrupters are able to reach young people at risk of violence, the program provides them with an array of support services from employment assistance to therapeutic support, and offers school conflict mediation through supporting service providers. Zayquan says it was the summer job he got through BIVO’s Anti-Gun Violence Sumer Youth Internship Program (AGVSYEP) that made all the difference for him. 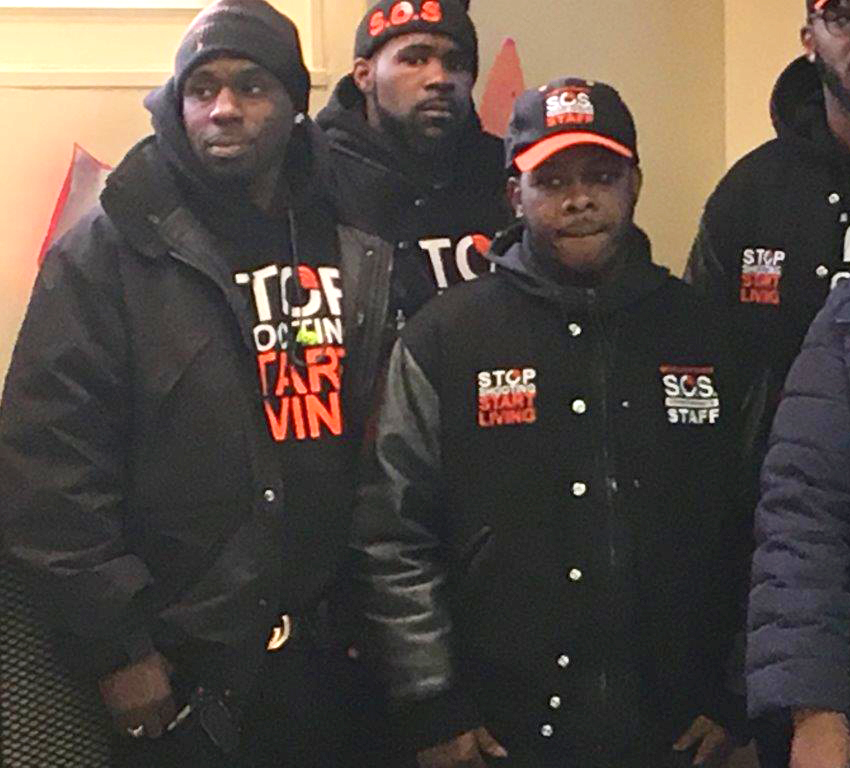 Zayquan (third from left) works with BIVO as a “Violence Interrupter.”

New York City generally has seen a reduction in crime, but the results in areas where Cure Violence has been implemented have been astounding. The model is credited with reducing stabbing and gun injuries faster than traditional methods. In fact, since BIVO implemented the Cure Violence model in the 73rd Precinct in 2015, shooting incidents decreased by 25% compared to the about 10% citywide reduction.

Zayquan loves his work because he has the opportunity to give back to the community, and be the example for young people that other Violence Interrupters were for him. He says he enjoys being an example for his younger siblings and for other young people in the area, “letting them know that I’m preserving a positive message.”

Learn more about CAMBA’s efforts to reduce young people’s exposure to violence through programs that empower them to be the change agents in their communities. Join us as we pursue our 2020 Vision campaign and help 1,000 at- risk youth get to college in the next 4 years.