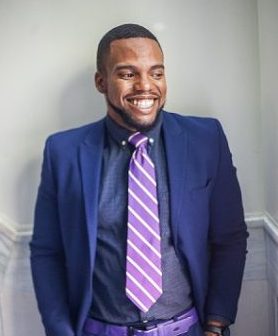 Kareem Youngblood‘s commitment to making a difference in the lives of Brooklyn’s at-risk youth is summed up in a quote presented in a recent magazine article: “I want to connect and get through to [the students], and that’s what I take most pride in.” As the Prevention Supervisor of CAMBA’s Young Men’s Health Project (YMHP), Kareem was recently featured in Amida Care’s PRIDE Magazine’s LGBTQIA Innovators for Change spread (on page 22). He has a rather unlikely second job: Kareem also performs as a stand-up comedian.

Kareem gives presentations to New York City’s youth by going into communities and schools, as part of CAMBA’s YMHP educational services. YMHP works to reduce HIV transmission among young men who have sex with other young men in Brooklyn’s communities of color. His presentation is not only educational and informational, but also hilarious. “I was in the middle of a workshop at a school I went to often and the teacher handed me a note saying you should really do stand up…and the rest was history.” Kareem then decided to take his comedic gift to audiences in bars and open-mic nights.

“I want to connect and get through to [the students], and that’s what I take most pride in.”

Of course, one can expect to find facts about HIV and STD prevention seamlessly woven into Kareem’s funny monologues about life. Similarly, Kareem continues to add comedy into his educational presentations through “ownership and honesty.”

“I talk about my life and the times I thought I was [HIV] positive. It’s something we all deal with. I talk about how everything Google said would happen happened. How you pray and make promises to never do it again, and to give to charity. In the classroom I make sure to run though the symptom list; I have had all of them.”

Kareem ends his talk by making a joke about finding out that digestive problems he had for an entire summer that he thought might be dangerous symptoms: “I just didn’t know I was lactose intolerant and I love ice cream!”

The YMHP program provides comprehensive prevention and support services to 300 people from ages 13-29 each year, including those who identify as transgender or gender nonconforming. This is where Kareem shines. His favorite part of his job? Kareem says, “working with a team of young men and having the opportunity to set the bar of what a healthy productive work environment is.”

While Kareem continues to dazzle audiences with his comedy sets, he remains dedicated to serving and educating populations at risk of HIV. While seemingly the two positions do not directly relate, Kareem adds, “nothing I do relates to anything but who I am. I do what I love to do, no matter what!”

With an outlook like that, it shouldn’t be shocking that Kareem also runs The CupKA’AK Bar, a baked goods company, and is a personal trainer. It’s impressive that he manages to be so successful across his wide range of interests, and CAMBA is certainly lucky to have such a talented and passionate employee aboard our team.

Each year, CAMBA reaches more than 65,000 individuals and families, including 10,000 youth. Without your support, we cannot continue to create and deliver our programs.